Today, on the 18th of April 2019, we held the kick-off meeting of the Open Dutch FrameNet project. In attendance were Piek Vossen, Johan Bos, Antske Fokkens, Hennie van der Vliet, Filip Ilievski, Tommaso Caselli, and Marten Postma. Due to scheduling issues, Malvina Nissim could not be in attendance.

The meeting was held at the Vrije Universiteit Amsterdam. Piek Vossen was the first presenter and provided a general introduction to the project, stressing the goals of reconstructing situations from the text. Also, he noted that different frames provide different perspectives about the same situations. 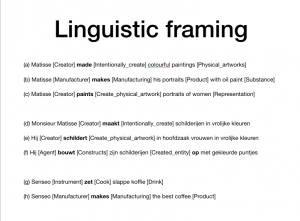 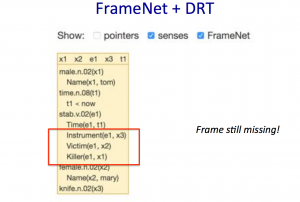 Filip Ilievski discussed data acquisition. He presented the current approach to obtain useful data for the project by exploiting the existing links between Wikipedia and Wikidata. Also, he presented the annotation tool that we’re using to validate data coming from a Data-to-Text approach. 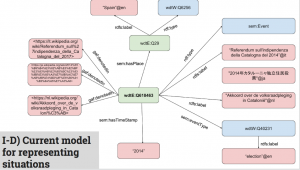 Marten Postma presented the current roadmap towards building a first version of Dutch FrameNet as well as building a baseline FrameNet-based SRL system. For Dutch, there exist relatively small corpora with PropBank-based and FrameNet-based annotations. We can also exploit the Referentie Bestand Nederlands. We’ve discussed options for the SRL system, stressing it should be able to incorporate structured data about a document. 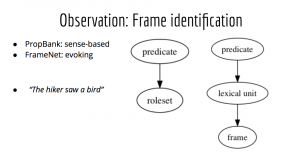